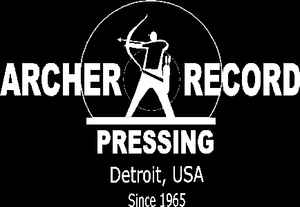 Profile:
Record pressing plant located in Detroit, Michigan, USA. The plant was founded by Norman Archer in late 1965, and continues to work with various independent record label operators. The company is now run by Norman's grandson Mike Archer. Andy Garcia, label manager of Docile Recordings and Cryovac Recordings, is known to have worked there. The plant has never had a lathe and so has never done any in-house cutting.

7" and 12" test pressings were delivered by the company with blank orange labels between 1965 and 1990. 12" test pressings from 1990 onwards have printed black and white labels showing an Archer Record Pressing logo on one side and "Advance Pressing" on the other side, with fields for date, customer, matrix number, title and artist.

How to identify Archer pressings
- Archer pressings are identified by either "ARCHER" or "NSC ARP" etched into the runouts. "NSC" signifies that the mastering was done by National Sound Corporation.
- Note: If "ARP" appears on its own, please consider American Record Pressing Co.
- "95" signifies that the metalwork was processed by Nashville Matrix.
- Some releases also have a number in the pattern "AR#####". Please do not identify Archer on the basis of an AR number alone, as this pattern is not unique to Archer. If, however, the release is on a small label from the Detroit / Michigan area, it is likely to have been pressed by Archer.

How to enter into LCCN
"ARCHER"
Add a company: Pressed By - Archer Record Pressing

The sequential number "AR#####" can be added to the catalogue number field of the Pressed By credit only if it appears in conjunction with "ARCHER", "NSC ARP" or "95". On its own, it is not a unique identifier for Archer and should not be used to make an identification. It should also not be entered if this number is also the catalogue number of the release.