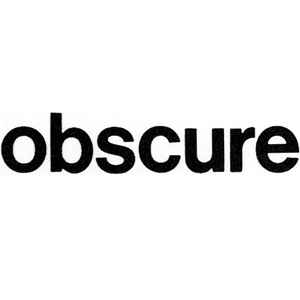 Profile:
UK label imprint focusing on "obscure" experimental music, established by Brian Eno in 1975 and run until 1978, with Obscure Records Ltd. being the company behind the label.

The first seven albums were issued on the Obscure label in 1975 and 1976, manufactured and distributed in the UK by Island Records whose name appeared at the bottom of the label. These have a catalogue number expressed as "obscure no. 1" through 7 on the covers, and "OBSCURE 1" etc. on the labels. All albums use the original, mostly black, cover art, designed by John Bonis of CCS.

In 1978, manufacture and distribution in the UK was resumed by Polydor who re-issued the first seven albums and three further volumes as OBS-1 through 10. These continued to use the original cover art. Polydor were able to obtain left-over covers made for Island Records, and issued their new editions of albums 1 through 7 with these covers marked as Island Records editions. Collectors seeking original editions are therefore advised that Island covers may contain Polydor manufactured records within. Later copies of albums 3, 4 and 7 with covers printed with Polydor markings and catalogue numbers have been confirmed. Vinyl labels for the Polydor manufactured editions are similar to Island's, but do not mention Island or Polydor. Instead they feature a "℗ Obscure Records Ltd" copyright symbol.

Also in 1978, Ambient 1 was issued. Originally intended as Obscure OBS-11, it came out instead as Ambient / Polydor / EG AMB-001. This record has a new label design for the Ambient series, but it was not used on subsequent volumes. An American edition was issued on PVC Records (distributed by Jem Records) as PVC-7908. This edition has a picture label that is taken from the cover art (a different label from the UK edition, although both are similar in appearance), and is therefore a custom label design. Passport Records in Canada copied the US design, rather than using the UK one.

The next two Ambient releases were issued by EG Records in 1980 in the UK as EGAMB-002 and 003. They were also issued in the USA (together with a re-issue of Ambient 1) as EGS-201 to 203. At the same time, Obscure 10 was issued in the USA as EGS-301, and Obscure 3 as EGS-303. All of these editions in both countries have white, non-picture "Editions EG" labels. Both USA re-issues of Obscure albums use alternate cover art, Obscure 3 being the same as the earlier USA edition, and Obscure 10 using a similar, matching layout. Editions EG was distributed by Polydor in the UK, and by Jem in the USA.

In 1982, EG Records re-issued all ten Obscure albums on their Editions EG label in the UK as EGED-21 through 30. Albums 3 and 10 use the alternate American cover art in these editions, and album 7 uses new cover art as well. At the same time, the Ambient series was re-issued in the UK with a fourth and final volume added, as EGED-17 to 20. The new volume was also issued in the USA with the same catalogue number, EGED-20.

No complete re-issue of the entire Obscure series has appeared since 1982, and given that Gavin Bryars has re-recorded his two pieces on Obscure 1 as two separate albums, it is likely that he and other composers are unwilling to consent to future re-issues of the Obscure editions in their original form. However, selected volumes have appeared individually from time to time. Albums 3 and 7 have been in print continuously, but are now regarded as parts of the regular catalogues of Brian Eno and the Penguin Café Orchestra, respectively. These two albums, along with all four volumes of the Ambient series, were first issued on CD in the 1980s on the Caroline Records label, which was the USA imprint of Virgin Records. The complete Ambient series is still in print, now on the Virgin label.

May 12, 2012
Recently I bought some LP of Eno’s Obscure Records as first pressing but some records have red label other grey.
So the question is which label is really first press, the red or the grey or are the same.
Even catalog number doesn't help me: all the grey label have Oscure x number but on red label I see sometimes OBS x number other time Oscure x number.
Many thanks in advance for your replay,
Mauro