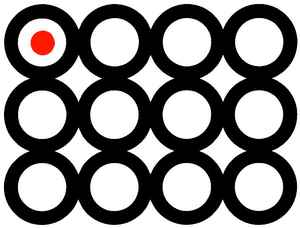 Profile:
Concept 1, composed by Richie Hawtin, marked a yearlong correlation between musical development and the progression of time.

The original series of 12 monthly 12" single comprised of 24 tracks, was strictly limited to 2,000 copies per release. As with the music, the stripped down product design evoked into a final identity. The final release (12:96) was packaged in a limited edition custom box (limited to 1000 copies) to hold all twelve singles, revealing the concept logo once all of the spines were next to each other, in order.

The music was a timely emission of that moment - each single was usually composed just weeks prior to its release.

This compilation was a reflection of the body of work within those twelve months of development. Only listeners who collected the project during the time of release were able to realize the full picture of Concept 1.
Parent Label:
Plus 8 Records Ltd.
Sites:
plus8.com