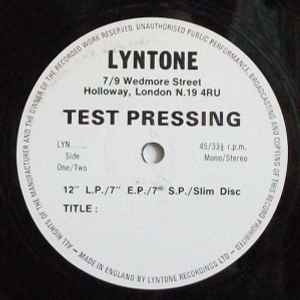 Profile:
English disc manufacturer.
Best known as a manufacturer of flexi-discs, due to being the European licensee of the flexi-disc process that was developed and patented by Eva-Tone Soundsheets.
Lyntone was plating (i.e. metal works) and pressing vinyl of all sizes, and very occasionally they self-released records with Lyntone as the stand alone label.

History:
Founded in 1957 (registered on 24 September 1958) by Paul S. Lynton, a former professional musician (double bass) to manufacture special records for industrial advertising and promotion.
The first product were picture discs.
In 1959, Lyntone is incorporated into the Rank Organisation's "Rank Audio Plastics Ltd".
In 1961, after Rank withdrew from record manufacturing, Lynton revives Lynton Recordings, manufacturing flexi "slimdiscs", in cooperation with Audio Plastics Ltd.. Early Audio Plastics releases also carry a LYN number.
In 1970, the company moves from London's Regent Street to Upper Holloway, North London, and gradually starts to also process and press vinyl records.
In 1983, Lyntone acquired an adjoining site and built a new manufacturing complex.
In April 1986 the company is renamed Lyntone Audio Reproduction Ltd.
In June 1987, the plant is taken over by Damont Audio Ltd., becoming a wholly-owned subsidiary but still operating as Lyntone.
In June 1991 came the final closure of the plant.

Identification:
Lyntone plates and/ or pressings can usually be identified by a pattern, consisting of an etched LYN or L, followed by 3 to 5 digits, e.g. LYN-943, LYN 2211, LYN.11095. Sometimes only the numbers are present. Add LYN or L and the numbers as they appear (e.g. LYN-1234 or LYN 1234 or L 1234) in the runouts as LCCN number but without the tailing numbers / characters (e.g. 1L, 2U, 3T, etc.).
When there are two different LYN numbers (i.e. one per side), add Pressed By (or Mastered At) twice and add the respective LYN number (see here for an example). When other plants are credited in the runouts, use Mastered At for Lyntone.

The numeral in a circle indicates the mother / positive number.