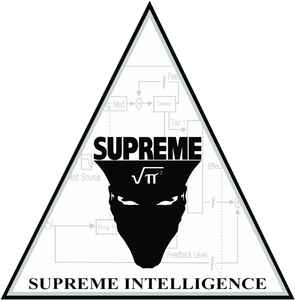 Profile:
Supreme Intelligence is the ONLY 100% true Darkcore label ever releasing the typically slow, dark sound for which this music was known and loved.The label was discontinued as the entire original crew moved on to the now immensely popular Enzyme label.

78 For Sale
Vinyl and CD

When hardcore music was losing it's popularity in the late 90's and a new style of hardcore music was slowly introduced to the public it didn't get a lot of attention. This label also had that problem. Not many records were sold when producers started releasing records on this label. Because most of them stayed for sale for months in the shops, you could find them in the bargain bins in some shops.

I had some of these records and I had to sell them for only 3 up to 10 guilders (about 1.70 up to 6 dollars) if I wanted to get rid of them. You could still even get some of these records around the end of 2001 / beginning of 2002 like Endymion - Demonsworld completely new at online shops like the one from Rige Entertainment.

Then around the end of 2002 when hardcore music became more and more popular the records dissapeared from all these shops and the prices were getting higher and higher.

This is the label, together with it's brother Gangsta, that made me buy vinyl.
Back then not many people understand the music. But today the records are hard to find second hand.

But unfortunatelly Cardiac started to repress the music. But I'm still proud to have all the releases in my collection.

This label set the standard for the nowadays darkcore style in hardcore. I suppose it was a bit to progressive for it's days, because most releases didn't became populair untill the end of Supreme Intelligence.

It also was responsible for one of the biggest hardcore hits of the last few years. Through inner Core by Meagashira (sin 9) is highly sought by everyone who missed it.
Only release that is still available is SIN 2 (endorphin). Perhaps the pressing was to big or people just don't really like it.