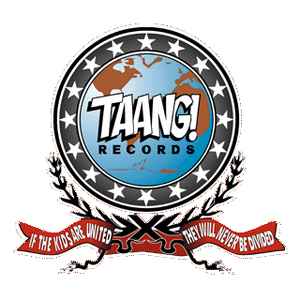 Profile:
Record label founded by Curtis Casella during 1983 in Boston, Massachusetts, USA. By 2019 the label had released over 200 titles.
Taang! is an acronym for “Teen Agers Are No Good!”

Taang! is also known for releasing crucial records of the UK Punk scene from a variety of bands that reformed : The Boys, Adicts, Spacemen 3, Cocksparrer, The Exploited, Slaughter & The Dogs.
As well as bands from all over the planet : Reverberation from France, Dicky B. Hardy From Yugoslavia, Hard Ons from Australia

Most recent releases in 2016 are : Negative Approach from Detroit & Killer Of Sheep From Pittsburgh.

The label plans to release a series of Compilations in 2020 as well as 50 titles on VINYL in the next 5 years including unreleased material from its bands as well as Box Sets.
In paying tribute to Boston 2020 will have a retrospective history of record label favorite Boston Band La Peste with a box set that takes us from their first studio session in Revere, Massachusetts with Me Curt pre single as well as the Intermedia Sound, Boston 1978 sessions as well as the Ric Ocasek sessions.