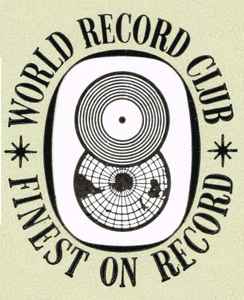 Profile:
UK label
Label Code: LC 0397 / LC 00397
Launched in the UK in 1955 as a mail order record label releasing all styles of music on LP (with some 45s), branches of the World Record Club operated separately in UK, Australia and New Zealand. Releases have different catalogue numbers in each country (except for the earliest Australian LPs). Australian releases had completely different sleeve designs to UK releases - New Zealand releases initially matched the Australian versions, and slowly diverged, often using the regular major-label sleeves.

The first LP labels were "World Record Treasure" up to about number T58 (middle of 1959) and then changed to the second WRC label either in red or green which lasted until 1965 (T500). The third label was the stroboscopic label, also in either red or green, which lasted until 1971 (ST1000). The fourth and last design was issued in two-tone orange and black although a plum and black one has been seen.

The Stereo recordings were first issued in 1959, although recordings had been made in both stereo and mono in 1958; a "stereo" sticker being fixed to both the label and the sleeve.
The first true stereo release seems to have been T26 with Anthony Collins and the Sinfonia of London. Later issues were shown as "World Stereo" on the label design, with their mono counterparts appearing as "World Sound (2)". In 1969, WRC announced it would cease issuing mono LPs (except historic recordings only available in mono) from July that year.

Reel-to-reels were issued in the UK on the World Record Club label (most releases in the 1960s routinely appeared on reel-to-reel too), unlike Australia, where a new label (World Tape Club) was formed. Reels were nearly always only issued in mono 3¾" format.

All the releases were under licence and were sent as far a field as Australia and New Zealand. The label was taken over by EMI in 1965. EMI (Australia) Limited bought World Record Club Pty Ltd from EMI of Britain in March 1969, with a share issue putting its value at A$200 000. The label continued to run until the 1980s. The name of the WRC was changed to World Records (6) on 26 October 1973.

By late October 1978 it had become the Retrospect Collectors Society.

By late August 1979 the HMV catalogue was listing World Records but only as historical re-issues on the SH series of numbers.

In Australia, the World Record Club was formed in 1957, and soon established its own design studio for production of distinctive sleeves which formed part of a strategy to differentiate their offerings from the major record companies. The club was already boasting of "tens of thousands" of members by late 1962. A select range of premium items were also offered under the label of The Record Society (Aust.) Pty. Ltd. As was the case in the UK, in the mid 1970s the World Record Club was taken over by EMI, and rationalisations ensued - a new uniform numbering system (R-, C, K, S and T for various formats, and the same catalogue number), and a uniform bland-style cover art for 2-3 years - the intent may well have been to boost regular EMI LP sales by running the club down. From this time, a focus on cost reduction resulted in less effort being put into original design work, and increasingly, titles were released with the recording company design stamped with a small World Record Club logo, or just a sticker on the back of the sleeve.

The initial label design followed the UK 'globe' design, except with the South Pole in the centre. In September 1958, the 'strobe' design was introduced, in beige for mono releases and (from April 1960 when it was introduced) light green for stereo. In 1971, the blue 'herald' design was introduced (a variant of this, in brown, had been used for releases by Record Society from the late 1960s, and was later brought out in gold for the WRC 'Retrospect' Series). This design changed slightly in c1980, with the text spread over the whole label, rather than being aligned to the right of the N-S axis. It changed again to a buff-coloured design in ~1983, and finally to a dark beige design in 1984/5 (although already from the 1970s, many releases appeared with the original label design, notably Philips, Vanguard and Deutsche Grammophon).

Australian World Record Club releases on the strobe label can be dated approximately by the address/es given on the rear sleeve. Prior to 1961, only the Melbourne address was given - 330 Flinders Lane. Until 1972, a combination of Australian capital city addresses was given, which changed every year or so. From 1972 to 1974, a single address was used once more - 365 Camberwell Road, Hartwell, Victoria 3124. From 1974 to ~1982, it was 605 Camberwell Road, Hartwell, Victoria 3124. Very late pressings have 301 Castlereagh St Sydney (which just happened to be the address of EMI), and finally, 22 or 222 Botany Bay Road. The Record Society address was originally 330 Flinders Lane, Melbourne, but this too changed over the years (see label info for more details). However, from 1972, reissues tended to not update the address combinations.

Deutsche Grammophon only allowed WRC to release its LPs if they retained the original design - the only difference being the WRC catalogue number appearing on the label and on the back of the sleeve at top right, with the address on the bottom right. A few labels did the same with the label design (e.g. Capitol with Sinatra LPs, and Vanguard), even in the 1960s, but it became much more common, for both sleeve and label design, from the late 1970s onwards.

Reel-to-reels were issued in Australia from late 1967, under a new label (World Tape Club) - invariably in both 7½ and 3¾ speeds, and in stereo.

In December 1984, the club was sold to a company, Electronic Enterprises Ltd., which saw more profit selling in the addresses/demographics of the membership lists (claimed at the time to number 200 000) - and which also claimed to be developing AIDS testing kits. This company folded in ignominious circumstances, with the director, Ken Wright, disappearing, and the company in substantial debt.

The New Zealand Club was established in March 1960, opening three branches in Auckland, Wellington and Christchurch at the same time.

Releases in New Zealand often used the same artwork as Australian editions, but used a different system of catalogue numbers.

As with the Australia branch, the number of addresses on the sleeves changed. Early ones have three cities, then gave specific addresses, grew to five cities, then shrank down to one.

April 11, 2013
World Record Club was an independent label founded in London in 1956. It did not become a sub-label of EMI until 1965 when that organization bought it.