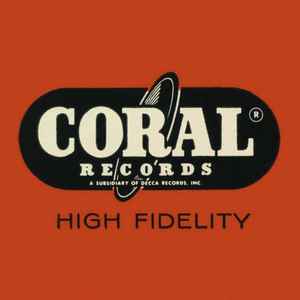 Profile:
US label, also credited as "Coral Record" or "Coral Records".
Label Code: LC 0166 / LC 00166
Coral was launched as the "independent" counterpart of the Decca label 1948. It recorded bandleaders like Bob Crosby in the beginning but it was under the A&R direction of Bob Thiele that Coral hit the bigtime with Teresa Brewer, the McGuire Sisters, Debbie Reynolds, Lawrence Welk mainstays The Lennon Sisters and early rock and rollers Buddy Holly and the Johnny Burnette Trio on its roster.

The label was operated by Coral Records, Inc. and was also active in the UK.
The parent company was acquired in 1962 by MCA, Inc. Artists who had records issued on Coral during the Sixties included Bobbi Martin, Barbara McNair, a pre-stardom Patti Austin and Dixieland clarinetist Pete Fountain, who was the label's most consistent artist.

As the decade wore on, the hits and album sales, apart from Fountain, declined. In 1968, Lawrence Welk bought the masters to his own recordings and the contracts of his musical associates from both Coral and Dot and moved them all to his own Ranwood label. Parent company MCA moved Decca to California, bringing Coral with it in 1970. It was then decided to discontinue Decca, Vocalion (2), Kapp Records and UNI Records in favour of the newly created MCA Records in April 1971. Coral remained as a budget label with both medium and low-priced material.

After the Decca, Uni, Kapp and Vocalion labels were officially retired in 1973, Coral became MCA Coral, MCA's mid-line and budget reissue label until the late 1980s when those duties were reassigned to either MCA Special Products or the parent label. This version had a blue label similar to the 1973-78 MCA Records label (with MCA CORAL in the same lettering style as the 1972-91 MCA Records logo).

Known International Releases:
Coral-branded releases (under its own name and as Vogue Coral) were distributed by Vogue Records Limited (originally a UK subsidiary of the French company Disques Vogue, later acquired by The Decca Record Company Ltd.) from roughly 1956 until 1967 in the UK when the MCA label was established for UK releases of US Decca and Brunswick material, and distributed by either TELDEC »Telefunken-Decca« Schallplatten GmbH or Deutsche Grammophon in Germany.

In Britain and most of Europe after 1967, Coral became the reissue imprint of MCA Records and its labels until at least 1978.
According to GVL, the label is now owned by Universal Music Entertainment GmbH.