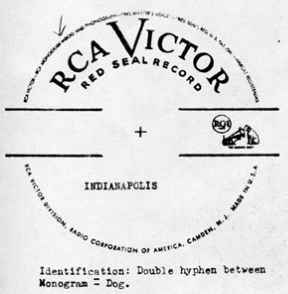 Profile:
Opened on August 5, 1939, this was the largest of RCA Victor's record U.S. manufacturing plants, pressing vinyl records and capacitance electronic disc (CED) products. Production of CED VideoDiscs ceased June 27, 1986, vinyl production was phased out by the end of 1987, and the plant closed in January 1988.

Note: After this plant's closure, some titles pressed in Indianapolis had stampers shipped elsewhere for repressing; these can be identified by the struck-through "I" stamp which can look like a "+" sign. Use the "Mastered At" LCCN role in these cases.

To identify 78RPM records that were pressed at the Indianapolis facility between Fall 1937 and early 1954, note the following label details: