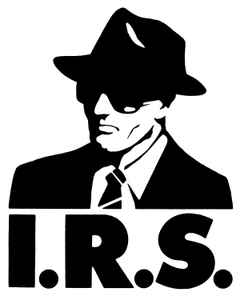 Profile:
I.R.S. (International Record Syndicate) co-founded in 1979 by Miles Copeland (2) and Jay Boberg as an American version of a group of punk & new wave labels that he operated in the UK under the umbrella name Faulty Products (a name that he later used for an I.R.S. sub-label in the US).

Initially a A&M Records sublabel, I.R.S. moved distribution to MCA Records in 1985, and to Capitol/EMI's CEMA Distribution in 1990.

Some I.R.S. releases were issued for the UK and continental Europe through Copeland's label Illegal Records (2). Copeland also established local I.R.S. offices in conjunction with his Illegal divisions in those countries.

Please add to the release/submission notes anything that would help clarify the country and label situation, such as any fine print regarding copyright and marketing/manufacturing/distribution etc.

Name variations as it appears on one or more releases:
- IRS Records

I.R.S. used several different catalog numbering systems over the years. Here is a primer on the patterns used during each of the three eras. There are a few releases that fall outside of these patterns, but these should be used where possible.

For more information on these numbering series, visit one of the websites linked below.

November 3, 2021
If i have to choose the most rapresentative I.R.S. record I say Wall Of Voodoo, Call of the West