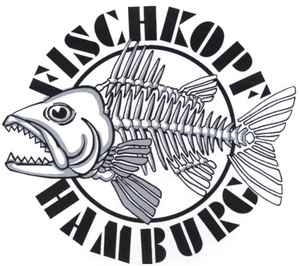 Profile:
"Fischkopf Hamburg" was founded in April 1994 by Martin Larsen. It was distributed via Container, DMD, PCD, and later on by SBM.
The label was specialised in Hardcore.

At least the first five releases were limited to 500 copies (source: Frontpage-Germany-Special, summer 1994).

February 24, 2021
fischkopf first caught my awareness when it was mentioned on the old DHR website ca. 1996 on the haywire tree of sites. they wrote, relating to DHR, that labels with 'similiar' ideas had sprung up in other cities as berlin, for example fischkopf in hamburg. it was not long ago that i discovered the hardcore / experimental world, and was completely in love with it, so i was pretty excited; a label from that scene, with that sound, here in hamburg, where i live? i immediately tried to find out more, and got to know fischkopf records operated from a store here in hamburg called container records, for records and CDs of all kinds techno; i think they had one of the largest sections for hardcore only in europe, at least this side of rotterdam. multipara's label discographies webpage - he had one area solely for fischkopf - provided me with further information.

but now, let's cut the introduction, and get to the basics.

fischkopf was started in 1994 by a group of people, including the operator of container records, martin, and people such as DJ Raid. the first release was done by cybermouse. in an interview it was stated that cybermouse caught the interest of the fischkopf crew as he was known for his eclectic taste in music in the container record store. this resulted in fisch 1 - cybermouse - surprise attack. the tracks on this release were done on an amiga 500, and actually first released in a diskmag called neurowaver, before they found their way on this fine 12".

the follow up was christoph de babalon's "love under will" EP. these two releases already set the way of what was to come, with their exotic, experimental approach to music that was not easily found elsewhere.

after the fourth release, the old crew disbanded. DJ Raid and others set out to create their own label (with others), Cross Fade Entertainment. the first release on the, "methods of mutilation", by somatic responses, was actually the first somatic responses EP also. it had originally planned to be released on fischkopf. also planned, but scrapped, was a fischkopf release by alec empire.

gerhard storz, called hardy, now took over the business of running fischkopf. the first release under his hands was "shortage of oxygen" by eradicator aka patric catani, one of the masterminds of the experimental and digital hardcore scene back then. what followed were releases by monoloop and lasse steen under the name of p.server, which, with their spaced out jungle and hard acid madness, showed that fischkopf could not be pinned down to one style. in this early period of fischkopf falls also the first outing by one of the most celebrated persons in experimental hardcore: joerg buchholz aka taciturne. with this release, "potpourri" EP, he also had the track which is probably the only one known to gabberists by this label; "der toten". it became a sort of "rave anthem", played on many a gabber party, and is, according to my knowledge, the best selling record of this label.

it also sometimes fetches wondrous prices on the discogs page to sell records.

cue several other later releases, and we arrive at fisch 12, "6 fragmente in der chronologie des wahnsinns". named after an independent movie, "71 fragmente einer chronologie des zufalls", it features hard hitting sonic experiments that were unseen at that point in history. you can find a more lenghty and conclusive review of this record on my blog. let's just add, that is also known to fetch wondrous bids of money on discogs.

by now it should be noted, that at that point, fischkopf had become a sort of phenomen. the "normal" hardcore scene more or less chosed to ignore most of its releases. hardy, in an interview for signal zero said, that it was actually one of his intentions, to make music that was outside the hardcore scene at that point, what he called the pcp and nordcore crowd.

so, fischkopf was actually much less known as many of its contemporary labels which sometimes even managed to drop compilations with their stuff in supermarkets and mainstream stores (hey, it was the hardcore heyday back then).

yet, to a smaller group of people, fischkopf was already known as being the source for brilliant, exquisite hardcore creations and sonic experimentation. so fischkopf managed to pierced many a subculture with its sound.

it is only now, it seems, that fischkopf seems to finally get wider recognition (although slowly growing), by the possibilites of the internet - or is it fading into total obscurity? only time will tell.

fisch 14 saw the first and only album by eradicator. tonal assault between 4/4 madness and an industrial record collection can be found here. catani actually got annoyed by the label, as they used a self-made artwork for this, instead of his own cover design.

in this middle period of fischkopf - we are in 1996 - three more important names appear on fischkopf. nawoto suzuki aka burning lazy persons, and the michelsen sisters, no name and auto-psy.

lenghty reviews are due elsewhere - let's just say i consider these releases to be amongst the most important at this point of hard electronic music.

fisch 20 had amiga shock force, with an aptly named assault of "psycore kids vs rave fascists."

fisch 23 saw the master release of fischkopf. a compilation with its acts and related artists. everyone always was about the vinyl version; but, according to me, better get the 2xCD, as some of the best tracks are CD only.

again, not the time for a lenghty review, but it is the outing of some of the best artists at that date with some of their best tracks, and spans from breakcore to acidtechno, from all-out noisecore to the most calm ambient.

fisch 24 saw a release by EPC, whose items are the subject of a collectors hunt these days.

after that - it was the end. why and how fischkopf ended is not clear. did hardy fell out with the container records crew? or didn't fischkopf generate enough attention and a clear balance, in the end?

no matter what it was, the shock hit the fischkopf supporters hard.

we're in 1997 now. by the fourth quarter of 1998, a white label suddenly appeared, followed by a regular release.

apparenly fischkopf was due to a relaunch? but just as it appeared again so fast, it faded away again - a shame.

the last outing was the white label of fisch 26, of which only a few test pressings seemingly existed. later, it was found out that it was done by cybermouse, who has also done fisch 1 - a nice and worthy ending for this great label.

this text only covers a fragment of information (or of "wahnsinn"?) about this underrated, appreciated, fantastic, groundbreaking label. much more is to be found out. it is up to you to find out more - or wait for more information to appear.

March 10, 2012
In an article of Orange Socks magazine, run by FFF, they published more background information about the label in an interview with Taciturne for Fischkopf.
The interview was done in the end days of Fischkopf, as the there were some problems at the parent label Container Records. Hardy, who runned the Fischkopf label in that time was busy at that moment with the set up of The new, OTAKU label, so the interview was done with Taciturne.

Fischkopf was found in 1994 by Martin of Cross Fade Enter Tainment with artists he gathered around Hamburg (Cybermouse, Christoph de Babalon). But he quit after the second release. So Hardy (the ruler of a radioshow called "Loud & Clear"), continued Fischkopf. Also involved in the project was the other radio partner of Hardy: Cola.

December 2, 2010
this.. was in the ninety's one of the hardest labels.
like user elementabuse sayd, i wonder what stuff they would release nowadays, wich i really do hope...

Excellent label this. Even though quite a few records weren't pressed very well, it's been home to some incredible records, notably early releases by the Michelson sisters(No Name/Auto Psy), etc.

Apparently the label was starting up again but there's been no news since that was announced at least 18 months ago. Would have been interesting to see what sort of stuff they would release nowadays. Ah well.