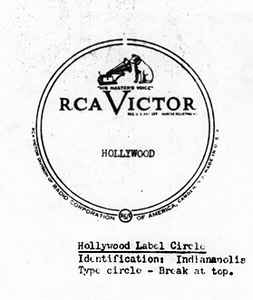 Profile:
Opened in 1928, RCA Hollywood occupied a full city block and included pressing, assembly, manufacturing & distribution offices plus several recording studios. Recording here ceased around 1947, but the pressing and distribution hub operated until 1976, when the plant burned to the ground.

Note: After this plant's closure, Motown titles mastered and pressed in Hollywood had stampers shipped to Superior Record Pressing Corp., Somerdale, NJ and Superior Record Pressing Corp., Tempe, Arizona for repressing; these can be identified by the struck-through "H" stamp and dual-plane pressing rings. Use "Mastered At" LCCN credit in these cases.

To identify 78RPM discs that were pressed at the Hollywood facility between Fall 1937 and early 1954, note the following label details:

I'm looking at the sites of these old, closed down pressing plants in Google Street View and oddly enough, right next to this one there is a record store called High-Fidelity. Coincidence? I THINK NOT!