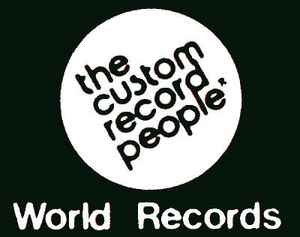 Profile:
Canadian record company and label with head office and production facility in Oshawa, Ontario and branch office in Halifax, Nova Scotia started by Bob Stone (3).
They made and distributed their own recordings plus acted as distributor and manufacturer for other labels.

Most recognized for its "custom records" released by small private labels and Not On Label (Self-released) records World Records (3) also made records for larger organizations like Canadian Talent Library.

In addition to the custom product World also released records under its own labels: Ampersand (2), Audat, Cascade (2), Scope (12), and World Records (3) (sometimes abbreviated as World).

Please note that World Records (3) did not press any of its own product or have its own studio / mastering facilities. These functions were subcontracted.

In addition to credits on the labels and jackets World Records (3) can be identified by unique runout, label matrix and CD matrix numbers.
These numbers may be entered in full with the company credits.