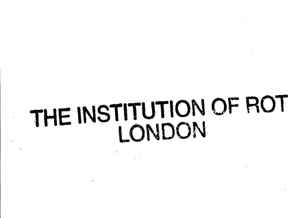 Profile:
In history as in nature, the rotten is the laboratory of life. Karl Marx

The wonderful Schreber...ought to have been made a professor of psychiatry and director of a mental hospital. Sigmund Freud

Only that which can destroy itself is truly alive. C G Jung

Please Note: There are many 'histories/herstories' of the IOR, you may not recognise/Identify yourself with what is written below.

Speak according to the madness that seduces you.

The Institution of Rot (IOR) was founded by artist Richard Crow and writer Nick Couldry in 1992 as part of London’s Secret Spaces. Situated in a Victorian House in Islington, North London, Richard Crow's working and living space (since 1983), the IOR has been from 1992 - 1996 an active artist-run space dedicated to performance, audio works and site-specific installations. Rooted in a mindset of do-it-yourself production and collaboration, the IOR significantly contributed to the extraordinary dynamism of London’s artist-run spaces phenomenon of the 90's documented in the "Life/Live" anthology edited by Laurence Bossé and Hans-Ulrich Obrist (Musee d’Art Moderne de la Ville de Paris, 1996). IOR’s specific concerns (and obsessions) were the privacy of the human body and its public transformations (ingestion, expulsion, cleansing, confession, rituals and taboos).

At present the IOR remains a ‘living archive’ - a kind of hauntology of recordings, objects, texts and images. From 2002 (until July 2009) the space of the IOR remained 'open' as a point of contact for international collaborations and occasional (unofficial) artists’ residencies in partnership with the curator in residence Lucia Farinati.