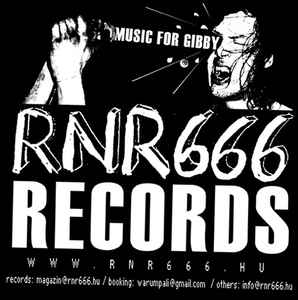 We make "MUSIC FOR GIBBY" because we love Gibby!!!

The RNR666 was born on May 14, 2005, thanks to three young men from rural eastern Hungary, who have been living in Budapest for quite some time. Szabo was chief editor of the legendary early 90s fanzine from Nyíregyháza entitled Búvárok Reménykednek (loosely translated as Hopeful Scuba divers), and owing to his sense of humour and honesty, his fanzine stood out from the lot (his was the only fanzine at the time which provoked a case to be brought before the courts), he made a comeback, however in the mid-90s with the brilliant publication: IBM; Csühes Pali, the most renowned member of the Yluhász Ylácint BT industrial band, as well as a member of the Neue Debrecenische Kunst collective from Debrecen; and Lavor who was one of the founding members of the 1000% Club street art group.
Something had been missing from Hungarian music and public life for a very long time and so we created the RNR666 RADIO SHOW, which began as an online broadcast. Without access to any sophisticated technology we puttogether a show using mp3s that couldn’t actually be streamed directly yet growing numbers of people began downloading these mp3 files, which were several hours long, and passing them onto their friends. We weren’t actually an online radio show in the traditional sense but an audio magazine (to this day none of us has an internet connection, [ actually we' ve got ] nor any professional equipment, or a studio; our programs are created using illegally downloaded music editing software, a dual cassette recorder and a dictaphone).
After a few programs, more and more write-ups began to appear on the site as an accompaniment to the music, and we shifted towards a more classical fanzine format: uncensored thoughts, subjective points of view. Many of our friends send us articles, concerts reviews and event reports, as well as otherideas. As such our editorial team is made up of more than 10 individuals. Some of us live in Budapest, others in small town around Hungary and some abroad. We always prepare our shows based on a theme, leaving most leeway for track selection, but we always try to approach a theme from as many angles as possible. We are able to book concerts in Budapest.

Flyers and visuals are provided by MANUALVIZUAL TEAM, which is made up of visual artists. We are also part of a network of concert promoters from Miskolc, Nyíregyháza, Debrecen and countless other Hungarian cities. We always write reviews for any new releases we receive.Please help provide us with any information you feel is relevant, including reviews, news releases, useful web links. In exchange we are happy to help you with promotion or concert bookings within Hungary.
Contact Info:
[email protected]