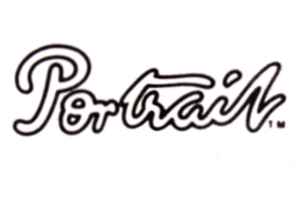 Profile:
The Portrait label was introduced in September, 1976 by CBS Records. The first artists that had releases on Portrait were Joan Baez, Burton Cummings and The McCrarys. Cummings' "Stand Tall" was the first single that was issued on the label, followed by Joan Baez' "Blowing Away" album, and the self-titled album by The McCrarys in early 1977.
Other notable artists that had releases on the Portrait label were Cyndi Lauper, Sade, and Heart.

The label design was similar to that of Columbia's single design on it was in grey tones, while the logo was handwritten orange with a red outline.

For a short time, between September 1980 and 1982, Portrait releases were co-branded with the Epic label.

In 1982, the label was relaunched again tapping into the New Wave scene and other music not gaining any airplay. It signed artists such as Altered Images, Aldo Nova, Accept, Arc Angel, Hawaiian pups, The Elvis Brothers, Eddy Grant, Orion the Hunter, the Producers, Saga, and Peter Baumann (formerly of Tangerine Dream). The label was completely black but the red logo stayed intact. Portrait struck gold again with the signings of Cyndi Lauper and Sade, both in 1983. Americans wouldn't get Sade until a year later. Aldo Nova did make some headway with the songs "Fantasy" and "Monkey On Your Back" from his "Subject: Aldo Nova" album. Saga also found success with the songs, "On the Loose" and "Wind Him Up" which would propel Saga to amass gold and platinum albums worldwide.

By the end of 1986, there were only a few artists that were released on Portrait. Cyndi Lauper was one of them.

In 1988, the label re-emerged once more with new releases covering soundtracks, jazz, latin, reggae and international pop. This time the label had a new logo: a painted P with the word "portrait" placed halfway the P's descender. Sometimes this logo was shown alongside the silhouette of a woman. In the same year the Portrait Masters series of jazz reissues was launched too. Cindy Lauper moved to Epic, although some of her albums and those of other former Portrait artists were still reissued on Portrait.

Around 1997 the label was revived in Germany (using the logo introduced in 1988). In the US it appeared on some compilations in 1998 (with a new logo) and was relaunched in 1999 as a hard-rock/metal label (using the original logo). Notable artists where Ratt, Cinderella, Great White, the Union Underground, and Mars Electric. In 2000, Iron Maiden signed with Portrait in conjunction with Columbia Records in the US.
In 2008 the label was revived in the UK by the local affiliate of Sony BMG Music Entertainment.

Most of the Portrait releases were remastered and re-released on Epic.