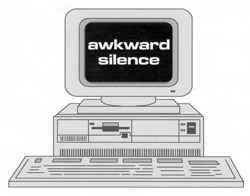 Profile:
Awkward Silence Recordings was an independent record label based in Kent in the south-east of England, which was started in 1999 and run by John, who has also been involved with running other indie labels in the past.

The label was set up to release limited edition split singles/EPs and focussed on featuring an artist who had released music on other labels on one side and then an unknown often quite similar sounding artist on the other.

The very first release featured the influential German electronic artist Arovane, at the time when he was just breaking through with the album 'Atol Scrap' with the worldwide debut release by the then unknown Christian Kleine, who later signed to Morr Music / City Centre Offices and was half of Herrmann & Kleine, on the other side. This continued throughout the catalogue, most notably with Papa M's (David Pajo) split single with UK underground post-rock band Unhome, long before the Slint reunions, and later with melodic electronic act ISAN releasing an EP with the excellent Tomcats In Tokyo from France, with the final split release featuring Fieldtriqp and Christ., which is the solo project of Chris Horne, former member of Boards of Canada.

Awkward Silence was always run as a hobby-label with releases appearing as and when the time felt right, often with long gaps between discs and then with two or more new singles appearing in shops on the same day! The label was also a firm favourite with John Peel, who played tracks regularly on his BBC Radio 1 shows.

The artwork on all releases has always followed the same layout with the main image usually being submitted by one of the musical artists on the release, with everything printed in monochrome colours. All releases up to number 18 were on 7" vinyl and then the switch was made to limited run 3" CDrs housed in cute mini m-lock CD cases in 2005. Short run vinyl pressing prices were proving restrictive and the new digital format meant that more music could be included on each release, up to 21 minutes.

The label's back catalogue features over 30 split releases by more than 60 artists from all over the world, many of whom are well-respected and have gone on to have successes elsewhere.

The missing catalogue numbers on Discogs:
awkward 09 - Awkward Silence Recordings mouse mat. A Christmas present to the label from within the Awkward Silence family in 2001. Limited edition of 1 only.
awkward 13 - Limited edition Awkward Silence Recordings T-shirt. It included the computer logo on the front breast with the label name and website address on the back, and each one was finished off with 'is t-shirt' on the lower front left-hand side. Each shirt came with its own catalogue number ID tag. Edition of 100 in total.
awkward 22 was due to be a split release for Bronnt Industries Kapital / Ecce, but it never quite happened.

Similar to labels like Static Caravan, Awkward Silence Recordings focuses on high quality singles by indie artists that share the same taste for great music, ranging from quiet idm to indie rock. Too bad they switched the format from 7" to 3"CDr lately, which in my opinion make the releases less collectable. At least they kept their trademark Ziplock packaging.