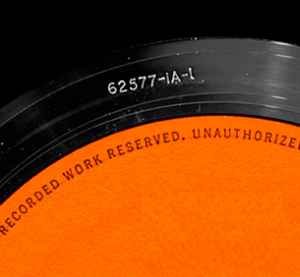 Profile:
UK record pressing and tape duplication plant in Buckinghamshire, run by CBS United Kingdom Ltd. from September 1964 until end of January 1991.
Prior to the CBS take-over, the plant was Levy's, Pressing Plant, Aston Clinton, part of the Levy brothers music empire, which included Levy's Sound Studios.
Until 1964, CBS UK pressings were done under a distribution agreement with Philips Records Ltd. between 1962 and Sep 1964. Also known as Oriole Pressing Plant.

The matrix on pressings is usually stamped at 12 o'clock, horizontally - rather than following the circumference of the runout, as found on Philips/Phonogram pressings.
The most obvious indicator for a CBS pressing is Λ, which is actually a faintly stamped "broken" A, which may also look like ∴ (3 dots in a pyramid), found at 9 o'clock, which is a stamper indicator. On high volume singles there may be other "shallow" letters such as B, C or F, of which one letter may appear as a broken circle or two brackets (). These indicators aren't Pressing Plant IDs (PPID) though.

At three o'clock there are usually one or two numbers; again these may also be very faintly stamped or etched.

Around 1977 the stamped matrix was replaced by a hand-etched one but the layout remained the same, i.e. the symbols are at three o'clock and nine o'clock.

CBS UK contract pressing matrices may vary and be hand-etched on a radial curve (still, usually, at 12 o'clock).

The plant relocated from Aston Clinton to nearby Aylesbury in 1980. Construction began in March 1978 and the official opening was on 20 June 1980.
The new press room then had 40 automatic Hamilton presses for LP production, and 20 SMT and MAP presses for singles.
The plant also included the printing of covers and labels.

CBS normally pressed 7"s with solid centres or 4 prong centres. However, they did experiment with dinked centres (and spiders) between March and May 1976 but had to give it up due to negative dealer feedback. It is unknown to what extent and for which releases dinked singles were manufactured by CBS but this has to be considered very limited only.

The last record pressed in January 1991 was Motörhead's 1916. The plant was then converted into a video duplication plant and all CBS records were subsequently pressed by CBS in Haarlem, The Netherlands.
Parent Label:
CBS United Kingdom Ltd.
Contact Info:
Since June 1980:
Rabans Lane
Aylesbury,
Buckinghamshire HP19 8TS
England
[obsolete]