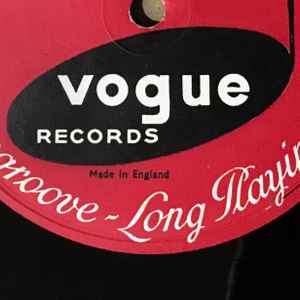 Established in 1951 as a subsidiary of the French parent company, acting primarily as an outlet for licensed American labels, but with some releases originating from France. In February 1956 the label was acquired by British Decca, and continued in its role as licensee of mostly American material (primarily from Aladdin). The Vogue trademark reverted to its French parent company at the end of 1962, with British releases of licensed American material continuing under the Vocalion (3) trademark, but still bearing the company name "Vogue Records Ltd".

The French company then licensed material to Pye Records until February 1965, when the Disques Vogue label was re-established under Pye's distribution. Those are to be listed under the Vogue label page.

It seems that the label existed in at least one other country, Australia, where it was distributed by Decca's then licensee EMI (Australia) Ltd until some time in 1964. A book of the Adelaide singles charts shows two Joe & Eddie singles on Vogue (catalogue numbers not specified) charting in that city in 1963 and 1964, with further charting singles being on Vocalion (3), also through EMI. Further internet searching indicates that the first Vogue charting single had the catalogue number V1001.

EP's:
EPV/EPC/EPG 1001-1285 (C denotes licensed from Contemporary, G denotes licensed from Good time Jazz; some releases in this series have a variable fourth letter which might be similar to the third letter export availability code found on UK London-American releases). This series was also apparently used by EMI (Australia Ltd), Decca's then licensee, releasing some of the English EP's with the same catalogue numbers but an extra "A" for Australia in the alphabetical prefix.

LP's - this needs further research, but early indications are that the following series were used:
L.D.E. (later LDE) 001 - ??? (10" LP's);
LA* 12000 - 12" Lp's, the * denoting a variable third letter, most seem to be E, but others are C (Contemporary), G (Good Time Jazz), T (presently unknown); 200+ releases;
VA 160000 - unknown number of releases, and continued under Vocalion (3) with some reissues of previous Vogue Records releases;
VA 8000 - also unknown number of releases, and the majority may actually be Vocalion (3).
Stereo issues in both the 160000 and 8000 were prefixed SAV, and again, some have a variable fourth letter. Decca seem to have applied the numbers inconsistently, with some albums having both mono and stereo versions under the same number, whilst others are in the 160000 series for mono and 8000 series for stereo.