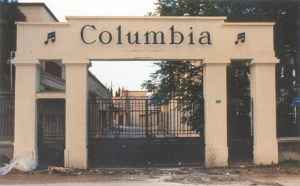 An additional (compilation release) titled Columbia 1929 - 1991 was pressed in 117 copies (as many as the pressing plant workers) and distributed to them, then the lacquer was destroyed.

12"-sized records between 1970-1991 / MT & A/A prefixes:
- Starting in 1970, a sequence of numbers was used, each number corresponding to the specific master tape (and the respective stamper) used for a vinyl LP pressed at the factory. In the 1980's these numbers were used for 12" singles / maxi singles as well. These numbers usually appear twice, with prefix A/A and MT: with the prefix A/A (e.g. Α/Α 12164) they are usually located on the labels; with prefix MT they are usually located on the sleeve (e.g. ΜΤ 12164). (The same number, usually without prefix, appears also in the respective cassette versions, duplicated in the same factory).
- Although this sequence was internally adopted in 1970, ΜΤ-A/A numbers started to appear on labels and sleeves at about 1973-74. (For example, the 1st issue of Deep Purple - In Rock, that came out in 1970, didn't feature any such numbers. The 1974-75 repress, In Rock, carries "MT 87" for the first time. All later reissues carry this number as well, throughout the 1980's.)
- MT-A/A numbers are a considerably safe indication of the release year for any Greek LP or 12" release pressed by Columbia, Athens, valid only for the 1st pressing of a release, provided it came out after 1970. For represses/reissues, date is usually not found on the release itself, but a helpful guide is the record company specifics (see EMIAL and EMIAL S.A. profiles for more).
- On LP releases originally released in the 1960's, MT-A/A numbers were appointed later, after the respective master tape was archived (and possibly remastered) for further (post-1970) reissues. (For example, Τσιτσάνης* - Τσιτσάνης, originally released in 1966, was appointed number 54 (corresponds to year 1970), however this number appears for the first time in mid-1970's issues, such as Τσιτσάνης,)

Add in LCCN: Pressed By: the sequential A/A number, without the prefix (e.g. 12164)
* Double LPs will feature two such numbers, one for each record. Please enter two credits in this case, three for 3LP sets etc.
Add in BaOI: Pressing Plant ID: the A/A+number(s), and/or the MT+number(s) along with any additional information, e.g. where it is found on the release artwork, which number corresponds to Record 1 or Record 2 (for double LPs) etc.
* Usually A/A and MT are followed by the same number.
Example: Χάρης Και Πάνος Κατσιμίχας* - Ζεστά Ποτά