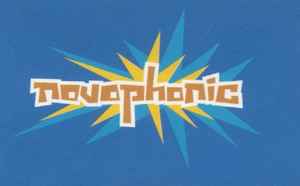 Profile:
- When was Novophonic founded and by whom?
Ummhh ... basically were founded by Sirope collective in 1994 ...

- Why was this label founded?
Because, it was necessary for us to create our experiments in our own label.

- Was there a particular reason?
In that moment we were very active & full of ideas, and the panorama was quiet death here in spain.

- How did the founders come up with the idea? Are they active in this area?
Pez published his first project PARAFÜNK album in an Spanish label called LA FABRICA MAGNETICA in 1993, after this experience he was always thinking about to create his projects and with Jon Izeta aka Gastón & Xabi Zirikiain aka Loreak Mendian creates SIROPE collective to expand experimental danz music doing different stuffs like: djing & programming the ETXEKALTE jazz club in San Sebastian, doing gigs all over Spain, radio show & fanzine called DANZ KLUB, clothes company called LOREAK MENDIAN. At the end of 1993 they meet the dj & designer Txarly Brown in Barcelona in a series of concerts organized by the promoter Producciones Animadas, in which Txarly was a member and designer, in a project called RAPADELIA that united the emerging bands of that time in Spanish Hip Hop , Eat Meat, 7 Notes 7 Colors and Parafünk. After this Txarly joins the SIROPE collective and in 1994 together they found NOVOPHONIC music label...

- What kind of groups or music appear on the label? In what kind of music category can we put them? Can we place them into a category?
You can find many different kind of groups into Novophonic: Instrümental (dub & rock steady atmospheres mixed with jazz), Camping Gaz & Digi Random (drum&bass symphonies mixed with easy listening, ska, soül, rock..) , Digi Onze (Latin & Afro influences), Parafünk (Funk, Disco, Pop, Rythm&Blues & Soül), Chazan y sus eclectricos (Jungle Pop with Electrónica juices)...The only category to define Novophonic it´s Novophonic Sound!!!