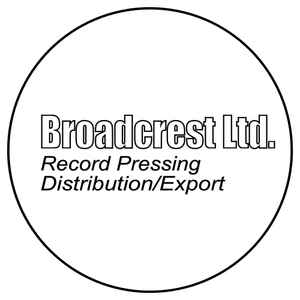 Profile:
Record pressing plant in Acton, London operating from 1982 until 2000. Owned by Derek Anthony Lewis Brown. Was also known as: Broadpress (UK) Limited. In 2007, the plant was taken over by Phoenix Of Vinyl Ltd..

Records pressed by Broadcrest are identifiable by a four-digit identification number with a lettered prefix etched in the runouts, sometimes accompanied by an etched "BC". Identification numbers can appear in the following formats and should be entered into the LCCN field exactly as etched (e.g. PA 3241):

When there are two different PA/BC/W numbers (i.e. one per side), add Pressed By twice and add the respective numbers (see here for an example).

Where any of the above identifiers appear on a 7" record, this indicates that the record was plated at Broadcrest but pressed elsewhere, for example. Here use Mastered At and add a note "Plated at Broadcrest Ltd." These platings were largely pressed by Lyntone Recordings Ltd. as Broadcrest did not have a 7" press.

Pressings can also be confirmed by the characteristic 'double dip' pressing rings. For instances where a PA/BC/W number appears but the pressing rings DO NOT, please use Mastered At and add a note "Plated at Broadcrest Ltd." Some of the platings carried out for P.R. Records Limited carry a PR### number, for example. Here, the number should be entered into the Broadcrest LCCN field and NOT the P.R. Records one.

In some instances pressings may be identified by just an etched "BC" in the runouts and the characteristic pressing rings, for example.

Broadcrest also had a CD manufacturing operation in Park Royal called Broadcrest C.D. Limited between 1996 and 2000, which was purchased by MPO (UK) Ltd and operated as MPO Broadcrest until 2005.
Contact Info:
[obsolete]