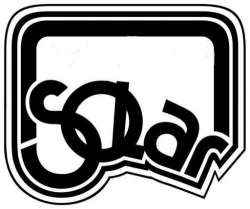 Profile:
Solar (an acronym of Sound Of Los Angeles Records) was founded in 1977 by Soul Train booking agent/talent supervisor Dick Griffey after creating and then shutting down the Soul Train Recording Co. (1975-77) label he had created with Soul Train host and creator Don Cornelius. After the success of a few singles on the RCA-distributed imprint (mainly those of the Soul Train Gang (2)), Griffey and Cornelius decided to shut down the label as Cornelius wanted to focus his energies on the TV show, which was a monster hit in first-run syndication and required his complete attention to keep it so.

Legalities taken care of, Soul Train Records closed down and Griffey reorganized the company as SOLAR in late 1977, which quickly became one of the most important and influential Urban Funk/Disco & Soul imprints of the late Seventies to mid-Eighties, and even spawned a subsidiary label Constellation Records, which had some success of its own (Klymaxx).

Griffey and Cornelius remained good friends, and as a result, the new Solar label maintained close ties to the show. Not surprisingly, Soul Train favourites Shalamar had one of their first hits as a result of two of its members (Jeffrey Daniel and Jody Watley) appearing on the show as regular dancers and being introduced to Griffey, who paired them with session vocalist Gerald Brown (2), who soon quit and was replaced with Howard Hewett. Shalamar was in fact Solar's biggest-selling and most influential act - scoring nearly 20 hit singles and classics such as: "Right in the Socket", "Make that Move", "A Night to Remember" and "Dead Giveaway".

The Solar success story was by no means confined to one act, several other artists enjoyed success, including: Dynasty, Klymaxx, The Whispers, Lakeside, Midnight Star, Carrie Lucas (who later married Griffey), and The Deele, the last of which gave L.A. Reid & Babyface (LaFace Records) their start. Griffey always believed in giving new talents the opportunity to create and develop their craft, being the first to recognize songwriters/producers Jimmy Jam & Terry Lewis (The Time, Flyte Tyme Productions), Reggie Calloway and Vincent Calloway, Leon Sylvers and the aforementioned Antonio Reid, and Kenneth Edmonds, to name a few. The label's sound was a collective effort, with artists working on each other's sessions and encouraged to be creative. Leon Sylvers was the producer behind the trademark Solar sound: funky, progressive dance music infused with soul and disco.

The late 1980s saw the label's fortunes decline: the reasons for which are many, but include A & R problems with Shalamar (primarily maintaining the group's identity while former members Hewett and Watley were having successful solo careers on other labels) and the shifting musical directions of R&B, dance and popular music in general in the late Eighties and early 1990s.

Throughout the label's lifetime, Solar was distributed by RCA (picking up its catalog numbering from the Soul Train label in late 1977 until it switched distributors in 1981), Elektra (1981-86), Capitol Records (briefly from 1987-89) and finally, Epic (1989-95). Reissues from the mid 1990s onward have been from The Right Stuff and Unidisc, which purchased the Solar catalog in 2009 from EMI, which had bought it from Griffey after the label's 1995 closure.

Dick Griffey died on September 24, 2010 at age 71 from complications of quadruple-bypass heart surgery.

What came out of Solar, just this one label alone is hard to quantify. Jimmy Jam & Terry Lewis, L.A. & Babyface, Midnight Star, Lakeside, Shalamar, Dynasty, Klymaxx, Leon Sylvers, and indirectly Teddy Riley. Their influence on music of the '80s is often understated.