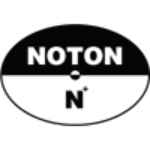 Profile:
Noton.archiv für ton und nichtton was founded by Carsten Nicolai as a platform for conceptual and experimental projects in music, art and science.
Some releases were joint editions with Rastermusic label although they usually include different catalogue numbers form each label.
In 1997 a list of the 10 first releases from the label were published in a Carsten Nicolai catalogue but some of these releases (Carsten Nicolai vinyl, Toby Burdon cd, David Rabinowitch vinyl, Robert Lippok vinyl, Byetone cd) are unknown so it's not sure if they were really released or not at the time or if they did only in a private way.
The idea for a conceptual CD magazine was realised as the 20`to 2000 series in 1999 which was completed (last three releases) through new (Raster-Noton) label when both labels were fusioned as raster-noton.archiv für ton und nichtton.
Sublabel
20' To 2000