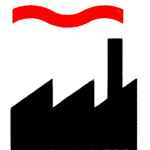 Profile:
On 19 May 1978, the TV presenter Anthony H. Wilson started The Factory, a series of club nights at the PSV/The Russel Club in Hulme, Manchester. Among the bands billed for the 4 opening nights were The Durutti Column, Cabaret Voltaire, and Joy Division. The poster for the evenings was designed by Peter Saville (2), who soon became a partner of Wilson and Alan Erasmus. In October 1979, producer Martin Hannett joined as a director too, followed in 1980 by Rob Gretton (manager of Joy Division & New Order) as fifth partner.

The club night was a success and led to the release of the double 7" EP "A Factory Sample" in January 1979. This EP marked the beginnings of Factory as a record label and featured bands that played at The Factory. When Wilson told Saville that their EP would be FAC 1, Saville replied that his first poster for the club was FAC 1 and the EP would be FAC 2.

Factory set up its first headquarters in Erasmus' flat on 86 Palatine Road, Didsbury, Manchester, where it resided until 1990 (a blue BBC plaque was erected there in June 2017). It then moved to 1 Charles Street, Manchester and was allocated cat# FAC 251.

In September 1991, news leaked out that Factory was near to bankruptcy and some record companies, including Mute, London Records, and Warner Bros. Records, made bids on the label. The label was not sold though, and claimed it had sorted out its finances. This proved not to be the case, and on "Black Monday", 23 November 1992, Factory Records went into receivership with a £2.5 million debt. A last minute saving arrangement with London Records collapsed when it became clear that, thanks to their no-contract deal, New Order -and not Factory- owned the rights to their material.

Factory pioneered indie label principles such as the 50/50 profit share, and most of their record deals (until the later years of the label) were done with a handshake and not a contract.

In 1994 Wilson launched a new label, Factory Too, with some releases coming out in conjunction with London Records. He also released a series of anthologies and re-releases from the Factory back-catalogue via London under the name Factory Once. He then started the label Factory Records Limited, this time without a cooperation with London Records. All imprints quietly disappeared around 1998. This was followed by a short-lived digital download project called "music33.com". In December 2004, Wilson announced that he was launching the "fourth iteration of the Factory imprint", F4 Records, again failing to amount to much.

Many titles from the original Factory catalogue have been reissued by the LTM (4) label. In an attempt to preserve the Factory brand and name, LTM owner James Nice, together with Alan Erasmus, Peter Saville and Tony Wilson's son Oliver, set up Factory Records Ltd. in June 2010. However, the idea was never seriously pursued and given up after one release only. Since March 2013, Factory Records Ltd. is owned by Saville alone.

Note: The label has been known on releases under differing names: starting as "Factory", then "Factory Records" and later back to just "Factory" again.
Note: For unofficial releases use: Factory (2)

August 30, 2022
the only label that mattered
(with the only bands that did too)

January 2, 2020
After completing the factory music medium entire numbered collection with all variations in 2011, I held the worlds first factory records music medium exhibition in Manchester at the Ducie Bridge public house for the Christie charity in the name of Tony Wilson all money raised went to cancer research there, the year after I held my second exhibition at the Ice Plant Manchester over the first bank holiday weekend in May where I released Factvm a catalouge of everything I owned at the time edited by Trevor Johnson (Panas/Johnson) back in the day at factory. I then went onto release my book in 2016 telling my story called Manchester Music & M9 Kidz, all funds again donated to charity, my search for a permanent exhibit central location to show this magnificent historical archive ended in 2019 as no one in the city was interested it's such a pity that the 40 anniversary came and went without my collection been shown.
See 1 reply

July 3, 2017
as a graphic design student now on for my BFA..factory was the reason I got into it back in highschool. I cite peter saville as my influence to no end. The design of 4AD by another influence of mine Vaughn Oliver with 23 Envelope will never ever compare to the graphic identity of Factory.

Tony Wilson and ALL at Factory not only established the coolest label of the modern era, but certainly grasped what the Punk ethos was actually about despite the ramblings and posturing of Mclaren and the rest of the "inner circle".

November 6, 2003
I belive that the 'Hacienda Club' was also issued a fac# so it's not a collection that sadly anyone is ever likely to complete now. It is without doubt though the total commitment to the image of the label, as well as that of the music they released, that has earned them their status as a design icon.

October 16, 2003
It must be pointed out that many Factory releases are not actually records/CD's. Fac1 for example is the poster Peter Saville produced for the opening of the Factory Club as are fac3 and fac4. Other early 'facs' range from note paper to badges to membership cards.

Collecting every Factory 'release' has become an obsession to many.
See 3 replies

June 11, 2002
Without doubt the most influencial British music label of
the 80's.

Without the talents of the Factory Artists and staff, i'm sure that we as a collective of music lovers,
would be less enlightened without the likes of Tony Wilson,
Rob Gretton, Martin Hannett and New Order.

Manchester offers many new and exciting musical attractions,
but all else seems pretty unimportant compared to the
achievements of Factory records.

Respect for doing what they wanted and for spending so much time and Money backing those who simply wanted to make the
music they felt in their hearts.