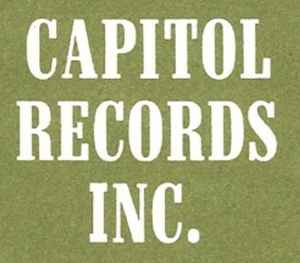 Incorporated in 1942, in 1946 went public enabling it to raise the $2M to establish its first factory Capitol Records Pressing Plant, Scranton (at the time the worlds largest record pressing plant)

In 1955 Capitol Records, Inc. was acquired by Electric & Musical Industries Ltd. "EMI" with Glenn Wallichs becoming a member of the board, the following year in 1956 the company moved to the Capitol Tower, a 13-storey, circular office building near the corner of Hollywood and Vine street.

During the mid-to-late 1950s, Capitol LPs had patented "T-RIM" process, as indicated on label rim text. This was a raised outer rim to protect the grooves when stacked on a changer, similar to the RCA "Gruve Gard". T-RIM LPs can weight 130-150 grams.

Prior to the 1955 acquisition,"EMI" had established Electric & Musical Industries (U.S.) Ltd. specifically to market and sell the European "Columbia" catalogue in the USA under the Angel Records trademark. (As it did not have the rights to the use the Columbia name in the US and Canada). In 1957 this company became an immediate subsidiary of Capitol Records, Inc. with it taking over the role of handling the Angel records label. In the same year Capitol Records, Inc. established its own local subsidiary Capitol Record Club (Capitol record Club, Inc.)

Capitol Records, Inc. existed in this form until 2007, when, after EMI's acquisition by Terra Firma Capital Partners, it changed its legal form to limited liability company. Since then, the company is named Capitol Records, LLC and this form is maintained to this day.