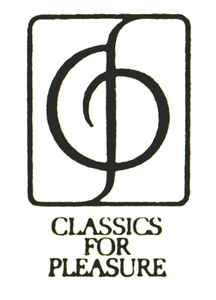 Profile:
This budget label, ​specializing in classical music, ​was introduced in 1970 as a subsidiary of Music For Pleasure Limited.​ M​any of ​its releases ​are reissues ​of ​EMI / His Master's Voice repertoire​, and​ commonly show the ​original publishing date, ​which ​of ​course ​doesn't match the release date​ for the reissue (as required in the Discogs database).

​As some releases remained in circulation for many years, several variants of the same release may exist with alternative label and / or sleeve designs.​ ​When such changes first came in there would most likely have been a mix of old and new covers and labels. See also the French variant of this label: Plaisir Du Classique (2)

The information below should help to narrow down actual LP release dates based upon label design variants, CFP logo variants, catalog number structure changes and the company address shown on the sleeve back.

​​This description focuses on UK releases, and may not be applicable to releases from elsewhere.

The initial label design had a black background overlaid by a large white square with curved corners. There was black text on white areas and white text on black areas. The Classics For Pleasure logo was black and placed at the centre top of the white square.

Catalog numbers had three digits and ran from CFP 101 to CFP 203.

Earliest releases featured no company address on the sleeve back, simply stating: "MADE IN GREAT BRITAIN BY EMI RECORDS (THE GRAMOPHONE CO. LTD.)" and sometimes also included a joint credit to EMI & Hamlyn Group.

1971:
During 1971, the company address started to be printed towards the bottom of the sleeve back. It was ASTRONAUT HOUSE, HOUNSLOW ROAD, FELTHAM, MIDDLESEX. Occasionally this appeared in an alternative variant as "42 THE CENTRE, FELTHAM, MIDDLESEX".

December 1972:
In December 1972 the catalog number format was changed to 5 digits, starting at CFP 40001. The original black and white label design was briefly retained.

1973:
Early in 1973 the label design was changed to a cream background with brown swirls across the upper half of the label. The Classics For Pleasure logo was red. .Copyright text was on three lines at the bottom of the label in brown.

1974:
During 1974, the company address printed towards the bottom of the sleeve back changed to 80 BLYTH ROAD, HAYES, MIDDLESEX.

1982:
Around May 1982, the company address printed towards the bottom of the sleeve back changed to 1-3 UXBRIDGE ROAD, HAYES, MIDDLESEX.

Spring / Summer 1983:
It was during 1983 that the third label design was introduced. This was essentially a variant of the second one. It retained the cream label background, but this time with a red swirl design across the upper half of the label. The Classics For Pleasure logo was black, and copyright text was on a single line around the upper circumference of the label, initially in black text, but this was later changed to red.

October 1983:
Following the arrival of the Compact Disc in 1983, the Classics for Pleasure LP Catalog Number structure was changed again in the October of that year. The four-digit number sequence was retained, but it was given a 2-digit prefix "41" and a 1-digit suffix "1". The last 4-digit number was CFP 4408 (Beethoven Symphony No. 7 etc,) and the first 7-digit number was CFP 41 4409 1 (Beethoven Violin Concerto etc.) Confusingly the full 7-digit number sometimes only appeared on the label and sleeve back, with the front cover `showing the 4-digit version.

May 1985:
The CFP sleeve front cover logo, which had previously been on a transparent background, changed in May 1985 to be red in colour on a black background.