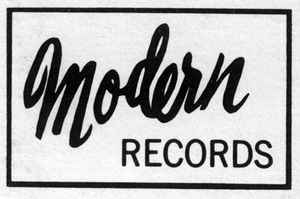 Profile:
For all unofficial / bootleg release of this label please use Modern Records (6) instead. "Hollywood" sometimes added to the label artwork.
This label was formed in the spring of 1945 (as Modern Music (7)) in Los Angeles, California, by the brothers Joe Bihari, Saul Bihari, and Jules Bihari. Les Bihari joined his brothers after the Second World War. The label name changed to Modern Records in 1948. The Bihari Brothers recorded country & western, jazz, popular, blues, and gospel, but the main focus was rhythm & blues.
The brothers built Modern into a major blues and R&B label. Their first success was "Swingin' the Boogie" by Hadda Brooks. They bought a pressing plant, and divided tasks among them equally, with Jules responsible for talent spotting and recording, Saul for manufacturing, and Lester for distribution. Joe worked with Ike Turner as a talent scout in the Memphis area, discovering Johnny "Guitar" Watson among others.