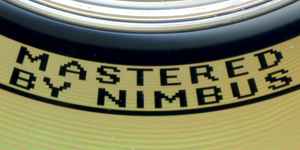 Profile:
Nimbus was the first CD-manufacturing plant in the UK and the third in the world.
CD pressing started in September 1984 at the Wyastone Leys Estate in Wales, where they had been mastering and pressing vinyl since 1977. Through the 1980s and 1990s other CD facilities opened in the UK (Cwmbran, Wales in 1986), the USA (Ruckersville, VA in 1987, Provo, UT in September 1994, and Sunnyvale, CA in 1995), and Luxembourg (1997). Between 1986 and 1988 London's Virgin Megastore (2) had a mini CD pressing plant by Nimbus in their Oxford Street branch where shoppers could see the manufacturing process through insulating glass panes. In late 1992, the manufacturing division was sold and renamed to Nimbus U.S.A. In 1994 it was renamed Nimbus CD International. It then merged with UK manufacturer Damont Audio, then effectively merged with CD-ROM giant R.R. Donnelley & Sons. In early 1997, Nimbus announced the closure of the Sunnyvale, CA, USA facility.

"Mastered by Nimbus" near the hub of a Compact Disc means the glass production master for that pressing was engineered by the CD manufacturing division of the UK-headquartered classical label Nimbus Records.

Identifying Nimbus on CDs:
"NIMBUS ENGLAND" (1984-86) or "MASTERED BY NIMBUS" (1986-) appearing in CD matrix areas (or any other "Nimbus" reference) should be entered both as part of the matrix data and also as a company (LCCN: Glass Mastered At, name: Nimbus). When entering CD matrix data, include any small dots, including those that appear around the Nimbus credit; these can vary from pressing to pressing. (example: CAT 008 CD · 1:3 ·MASTERED· ·BY NIMBUS·).

The dots after the catalog number indicate the pressing serial number - starting with one dot, with a maximum of nine dots possible. This doesn't mean that every release should start with one dot. The first public pressing may start with any number of dots (if previous runs were faulty). In the 1990s there were laser etched numbers added after the dots that mean mother:stamper. Optional (V) after catalogue number means that CD was glass mastered at Charlottesville, Virginia plant in the USA. The dots around the Nimbus credit indirectly represent the period when the mastering was done, while also being a decorative element. First pressings from 1984- circa 1986 had no dots; later, they were gradually added on both sides of credit starting from two dots (one middle dot in each line) up to five, while the last variant had only one dot between the lines. In 1997 words and dots were replaced by stylized Nimbus logo. Exact periods of credit dots are approximate and not documented so it is not allowed to use them to guess the date by now.

Around 1994 UK Nimbus plant started adding to its matrix string sequential numbering system with pattern:
XXXX before catalog number, that was later changed to YXXXX
Y = letter: A, B, C etc.
X = number
this XXXX / YXXXX pattern can be added to the LCCN section.

In late 1997 or 1998, the matrix numbering scheme LUxxxxxx was introduced. This matrix number is usually accompanied by the mould SID code IFPI 7Q**, and may identify CDs manufactured at the plant in Luxembourg. This scheme was continued by Technicolor after the purchase and rebranding of Nimbus. This matrix number may also be entered in LCCN when present alongside the Nimbus logo.

In the early of 1990s very few glassmasters were outsourced for example at CDM, Malmö, Sweden. CDs glass mastered at CDM can be identified by "CDM0x" or "CDMAx" in the matrix, where "x" is a digit from 1 to 4. In these cases you can add "Glass Mastered At" – CDM (10) in the LCCN section, please also add "Pressed By" – Nimbus. (example: Main - Motion Pool and Michael Sweet - Michael Sweet).

Identifying Nimbus on vinyls:
Nimbus was also engaged in vinyl mastering and cutting, especially in the audiophile / ultra-high quality area (UHJ encoding, Nimbus Supercut), as well as electroplating and pressing. Nimbus cut using a Neumann lathe (with advance varigrove electronics designed by Dr. Jonathan Halliday) with a Neumann SX 74 cutter head, driven by Neumann 300 watt valve amplifiers with added transistor pre-amps. For pressing they used a Hamilton automatic press and a powder vinyl mix from ICI based closely on the formula used by EMI Records.

The remaining numbers and letters are thought to be internal codes used by the plant, but their exact meanings are unknown.