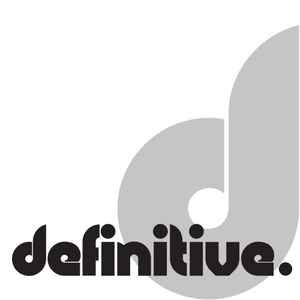 In the spring of 1992 three DJs, John Acquaviva, Richard Hawtin, and Karl Kowalski founded a label that would embody their idea of house music. John and Rich were no strangers to the dance music scene, having founded Plus 8 and Probe over the previous two years. As music went, John, Rich and Karl loved all sorts but preferred it best when they were able to play house music that was not too hard and not too soft. They were fully aware of the various house scenes, but felt there was no particular label that had their sound in mind.
The label is directed by John and Richie with Karl keeping a presence on an artist level (Jetstream and Dance Fever). The label is associated more with John Acquaviva these days, as he is busy travelling the world, much like Richie, promoting the Definitive Definition of house music. Although having cofounded the famous Plus 8 label, both John and Rich have proven that they are well rounded and can really do it all. Definitive is quickly becoming a breeding ground for new talent for house music from throughout the world.
Since 1992, Definitive has put out more than 40 releases for the house community. They have had such anthems as the Blunted Dummies' "House For All", and Robotman's "Dodadoo" with its numerous mixes notably the Plastikman mix. They have also had a number of dj/artists emerge to become notable figures in the scene.
People such as David Alvarado from Los Angeles did his first works under Las Americas, he now has his own successful Bomb label and has produced for the Stickman label, and Strictly Rhythm. Bryan Zentz of Norfolk Virginia with his Barada project. Ian Pooley from the Frankfurt area with his self titled project. Boomer Reynolds from Toledo Ohio with his Omegaman project. Chuck Phulasole from Toronto and his self-titled project. Clemens Neufeld from Vienna with his aptly titled Future Legends.
All these people have made noticeable impacts on artist levels as well as Definitive as a label. The Definitive label has established both artist identities as well as carving out a strong label identity in a brief period of time.
Parent Label:
Plus 8 Records Ltd.
Contact Info:
Email: [email protected]
Sites:
definitiverecordings.com, Facebook, MySpace, YouTube

This label will always hold a special place in my heart. These tracks were all over Detroit during my formative years. Ahhh the 90s. They would jam in the dance room at Record Time who kept a stock 100+ deep, you would hear them at every party, in a host of local mixtapes, and on the air on 89X on Friday nights during the Transmissions radio show hosted by Intellinet/Plus 8. This label just screams PARTAY. The catalog is deep and diverse with many releases standing the test of time. Some of the best acid of the day can be found here with Barada's releases and Plastikman's mixes. The label's slogan "House for all" by Blunted Dummies is a stone cold classic that never gets old. Other straight up house jams by Juicy Fruit and mixes by the Maestro Mike Huckaby bang, amongst others. It would be hard to find another label that has as lethal of an arsenal of Disco House cuts such as those by Omegaman, Nick Holder and Troy Brown. Not to mention early morning burners from the likes of Dark Ages and the funky fun works of Cantina sampling the Swing Era and Star Wars that would make Jabba the Hutt himself get up and do the worm. I could go on. This label has rocked the house for over two decades and will continue to do so for many more.