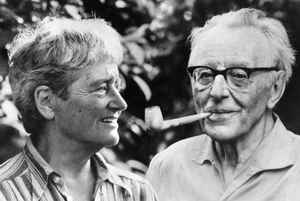 Profile:
Carl Orff was approached by Dr. Alfred Krings and Rudolf Ruby from Harmonia Mundi Records. The outcome of this meeting resulted in ten records being produced in random order from 1963-1975. Each record contained a detailed commentary by Dr. Werner Thomas. Orff in his autobiography states that “an internationally understandable title had to be found” for the recordings. “Musica Poetica,” he continues, “speaks for itself.” The title of the recorded series draws attention to the meaning of the word, language and poetry as they are woven together with musical models that invite the student to change and develop them into a personal form.

The contents of the ten records correspond to the arrangement of select material in the five main Schulwerk volumes, but also contain material from the supplementary volumes and some newly-composed vocal, speech and instrumental pieces. They represent the definitive “documentation of the Schulwerk in sound” as quoted by Orff.