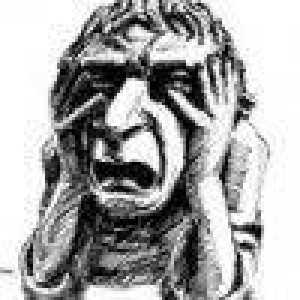 soulchap updated about 1 month ago

All vinyl records (at least as far as I know) end in a locked groove - this is done to protect the stylus from drifting onto the label, etc. A locked groove simply never advances; the groove changes from the spiral it was on the way in to a closed circle. Many of us have experienced the heartbreak of a home-made locked groove, a.k.a. a "broken record," that repeats a phrase ad infinitum until one gets off the couch and picks up the tone arm and manually advances the needle.

Along the way, someone figured out that the "runout groove" was arable land waiting to be seized.

Why, then, would anyone do this on purpose? One finds albums of locked grooves in the Library Music world; discs of sound effects were manufactured for the purpose of providing the sound of a continually dripping faucet, say, for a radio drama, etc. DJs building dance tracks live, on the fly, in clubs or while recording, found that infinitely looping snippets were useful and worth stockpiling. There are examples of "blank" locked grooves used within albums to separate tracks solely for the purpose of forcing the listener to advance the tone arm. Others were more playful.

My list of various treatments of vinyl:
Vinyl Variations

Please contribute your finds (message me.) Thanks.