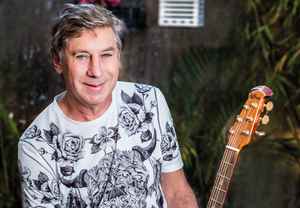 It was revealed in the 1970's by the motion of the Clube da Esquina, which also revealed Milton Nascimento, Lo Borges, Beto Guedes, among others. Participated in the musical group O Terço, between 1974 and 1976, before creating in 1979 the group 14 Bis, in which a hit between 1980 and 1987, when he left the group to pursue a solo career, also with great success.

Among his main achievements as a composer or performer, are "Todo Azul do Mar" "Linda Juventude", "Planeta Sonho", "Nascente" (the song has been covered over by Brazilian and foreign artists), "Nuvens" "Caçador de Mim" "Espanhola" (partnership with Guarabyra, of the double Sá & Guarabyra), which is his most popular song and was a big hit between 1986 and 1987, and "Mais Uma Vez" (partnership with Renato Russo, leader of Legião Urbana, which was originally recorded by 14 Bis in 1987 and win a new version in 2003, with only the voice of Renato and included on the soundtrack of the soap opera Mulheres Apaixonadas). From solo career, stand out among other songs, "Princesa", "Besame" and "Céu de santo Amaro".
Sites:
flavioventurini.com.br
Em Grupos:
14 Bis, O Têrço
Variações:
Visualizando tudo | Flávio Venturini
F. Venturine, F. Venturini, F. Venturnini, Flavio, Flavio Venturine, Flavio Venturini, Flávio, Flávio Hugo, Flávio Venturin, Flávio Venturine, Hugo, Venturini