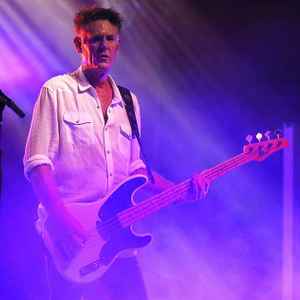 Credited on most releases as Bones Hillman. Originally the bass player with West Auckland band, The Masochists in 1977, and then with Suburban Reptiles, and The Rednecks. After that he moved to The Swingers (1979-1983), then went onto Coconut Rough (1983?-1985). He joined Midnight Oil in 1989 replacing Peter Gifford and remained with the band until its dissolution in 2002. He has a side project called The Hunting Party. He is credited with maintaining the sense of humour in Midnight Oil and is a favorite for interviews due to his witty comments.
Sites:
boneshillman.com, AudioCulture.co.nz, audioculture.co.nz, Wikipedia, imdb.com
Apelidos:
Wayne Stevens
Variações:
Visualizando tudo | Bones Hillman
B. Hillman, B.Hillman, Bones, Bones "Dwayne" Hillman, Bones Hillmann, D. Hilman, Dwayne (Bones) Hillman, Dwayne Hillman, Dwyane 'Bones' Hillman, Hillman, Stevens, Wayne Stevens

Artists performing under a pseudonym, stage name or nickname (a name other than their real or birth name) por Sacstracks
Ver Mais Listas →