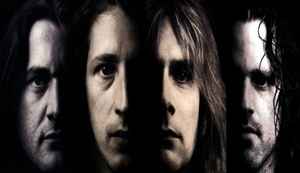 Профиль:
Metal band from Austria that endured several name changes over their existence. They debuted as a trio in 1992 under the name Big Heat. After adding a vocalist to complete their lineup, they recorded "Grand Ominous Dreams", still as Big Heat, but soon changed name to Stigmata (the album has been released under both band names, with different artwork). Their third album was released as Stigmata, but due to a name conflict with another band, the group appended the IV to become Stigmata IV. Finally, in 1999, the band was forced by the courts to change their name one last time, and so they became Stygma IV.
Вебсайты:
stygma4.com
Альтернативные названия:
Big Heat (2), Stygma IV
Участники:
Alex Hilzensauer, Alexander Hilzensauer, Günter Maier, Herb Greisberger, Ritchie Krenmaier
Вариации:
Все | Stigmata IV
Stigmata, Stigmata 4