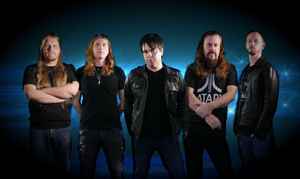 Профиль:
Sandstone is a 5 piece melodic metal band for Derry in Northern Ireland founded in 2003 by Stevie McLaughlin (lead guitar) and Sean McBay (vocals)
Their mix of tight Power Metal spiced with a decent dash of melodious Progressive is riveting and reminds you a bit of Fates Warning, Iron Maiden, Queensryche, or even Guns'n'Roses. The latter may be a bit odd, some will say, but SANDSTONE dare and manage the almost impossible, creating a versatile, exciting, and unique style.

From the beginning Sandstone are committed to writing their own material and working in their own studio, Stevie's brother David McLaughlin (bass) and Paddy Flemming (drums) join the two, completing the band. The foursome wants to perform their songs live as soon as possible - which they do, turning SANDSTONE into a household name in the Irish scene very fast. 2006, they sign a deal with Casket Records, and the label releases their debut album "Tides Of Opinion", consisting mainly of material written since 2003. The album, containing twelve songs recorded in their own studio, is very well received by the press, the gist of it being "I haven't heard such an impressive Hard Rock album for a long time".

"Tides of Opinion" opens a lot of doors for SANDSTONE: they play numerous gigs, and also a tour the UK in 2006/2007. Even hyper-critical British music magazine Kerrang! is crazy about the band's outstanding live performance. 2008, they start working on the successor of "Tides Of Opinion". Once again, the band is recording in their own studio, thus being independent of tight time schedules and pressure - and the new compositions mirror that advantage.

Right from the start, "Purging the Past” is a statement: these young men have matured as a band, and they have honed their songwriting and stylistic skills remarkably. This album is also released by Casket Records and gets brilliant reviews. No wonder LIMB MUSIC is interested in this gifted combo (being a perfect fit for their band roster): the label licenses the album right away.

So, finally "Purging The Past" is released beyond Ireland - with a new artwork, remixed by the band, and remastered by Uwe Lulis (Rebellion, ex-Grave Digger). The 12 songs on the album are versatile, catchy and impress you with classy songwriting.

After the critical success of second CD 'Purging the Past' described by Bruce Dickinson as "the most promising thing to come out of Ireland in years", Sandstone raised the bar with their 3rd release 'Cultural Dissonance'.
Cultural Dissonance depicts a band that is not afraid to grow and evolve both as performers and as songwriters: Still apparent is Sandstone's hallmark, dynamic and emotive lyrics and meticulously crafted melodies, but now with a new directness and technical intensity. They had finally found a way to forge their diverse influences and creative ideas into one coherent style that somehow manages to be ballad-like and heartfelt yet bone-crushingly heavy at the same time.
The album was a great success for the band and the press rewards the band with fantastic reviews, describing the alum as ‘A small masterpiece’ and ‘an album that can combine the fast and melodic elements of Power Metal, with complexity of Progressive, into a mixture that has no weak points’.

A band doesn’t release music of this quality without creating demand from fans across Europe to see them live, and the success of Cultural Dissonance created the opportunity for Sandstone to tour across Europe as main support to Tim ‘Ripper’ Owens of Judas Priest fame. Cutting their teeth on the live European circuit, the band rises to the challenge gaining many new fans and admirers on their journey across Europe and Eastern Europe, and adding a charismatic second guitarist to the mix Dee (Kivi) Kivlehan. The tour sees the band grow into a well oiled metal machine and the biggest hit of the tour is their performance of the song Sleep from Cultural Dissonance which takes advantage of the exceptional guitar skills of founding member Stevie and soaring vocals of Sean. The band got on so well with the ex Judas Priest front man that he even offers to perform on their next release.

No sooner is the tour ended and this committed and prolific band are back in the studio putting together the current release Delta Viridian: A semi concept album based loosely on themes from the classic novel Cat’s Cradle by Kurt Vonnegut. The album deals with such lyrical ideas as religion, nihilism, and mankind’s neurotic infatuation with self destruction and witnesses a consolidation of the band’s unique approach to melodic and sincere story telling over a musical palette of all that’s good in the genres they love. Sandstone make a virtue of walking the fine line between hard rock, power metal and progressive rock, allowing all three approaches to constantly battle each other and never conceding a victor. The result is additively compulsive listening.
Участники:
Sean McBay, Stevie McLaughlin