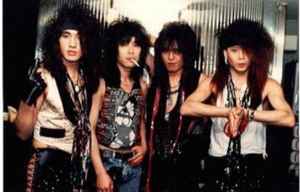 Профиль:
Japanese power/speed metal band from Tokyo, formed in 1982. Were counted, alongside heavy metal stalwarts Anthem and Sabbrabells, as being among the most important bands in the Kanto (East Japan, Tokyo-Yokohama area) metal movement, which was seen to be a rival movement to the Kansai (West Japan, Osaka-Kyoto-Kobe area) metal movement.

In 1989, Reaction disbanded. Vocalist Junya Kato quit due to artistic differences, and along with Presence's guitarist Kazuhide Shirota they created the supergroup Grand Slam the same year which also included Hironori Yoshikawa of 44 Magnum, and Yoshihiro Toyokawa on drums from the band Make-Up.

Reaction had a number of singer changes but otherwise the members stayed the same throughout their career. Eventually they hired Junya Kato who would go on to contribute vocals to every full-length Reaction made.

The band reunited in 2006 with a new vocalist but split-up again after the death of guitarist Yasuyuki Saito in December 2008.