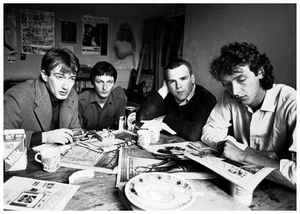 Профиль:
English post-punk group from Leeds, formed in 1976.
Dave Allen (5) left shortly after 'Solid Gold' was released and was replaced by Sara Lee. After the third album Hugo Burnham also left and was replaced by programmed drums.
In 1984 the band broke up until 1990 when King and Gill started working together again intermittently.
After 2011's 'Content' Andy Gill remained the sole original member until his death in 2020.
In 2021, the band reformed with original members King and Burnham, later member Sara Lee and new guitarist David Pajo.

9 марта 2022 г.
I saw them open for the Buzzcocks at Irving Plaza on the first tour, I saw the last time Andy played live at the Colony in Woodstock and now the Gang without Andy in Philly. Each show as good as the others. In Philly I ran into Hugo and he pointed out that Irving Plaza was a long time ago and we are a lot older. I said fuck that we are getting younger. He looked at me and we laughed at the absurdity of time in Rock and Roll. He went on to play with the fever and intensity like we were there, at Irving Plaza. The whole band was in such top form.

29 декабря 2021 г.
I simply cannot believe Andy is gone. I saw him on his final tour November 2020 I was right at the front of the stage. The place I have been since my very first Gang of 4 show on the Hard tour with Sara Lee on Bass. Other articles have referenced the band had just come back from their Asian swing of the tour and they believe he was one of the first victims of the Covid virus. RIP Andy Gill

2 февраля 2020 г.
RIP~ Andy Gill.
Back when originality counted more in Punk/Alternative music, Gang Of Four pioneered a funk/punk sound that inspired many bands to follow like the Chili Peppers. Entertainment should be in any self-respecting Punk fans collection. Thank you, Andy, for the soundtrack of my youth.

22 октября 2010 г.
what you can hear in gang of four is that they did not give a crap about anything going on musically at the time. they do not sound like anyone else. it's so obscure all you can say it's leftfield music somewhere between punk and pop. an odd angst against what was popular at the time done with some european attitude, thrown in some kind of funk and where you cant put your finger on the influence or what it influenced. just a really odd outfit that worked
Показать 1 ответ