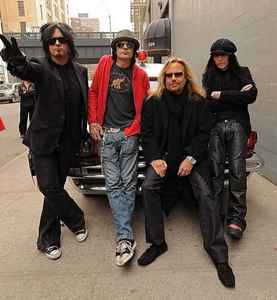 Motley Crüe was founded by Nikki Sixx (bass), Tommy Lee (drums), Mick Mars (guitar) and Vince Neil (vocals). The classic Crüe line-up broke up in 1992 when vocalist Vince Neil left the group and was replaced by John Corabi. In 1997 the band reunited with Vince Neil. In 1999 Tommy Lee departed to pursue his solo career and was replaced by Randy Castillo. In 2004 the original line-up announced their comeback.

In 2014 the band announced their retirement and their final show took place on the New Year's Eve, December 31, 2015, at the Staples Center in Los Angeles.