U2 ‎– No Line On The Horizon 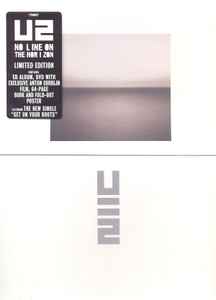 Deluxe limited-edition-collectors item: packaged in a special box, album CD in a cardboard folded sleeve w/ 36 page color booklet and fold out poster. Box also includes 64-page hard cover book plus an additional fold-out poster and a DVD of the new film from Anton Corbijn featuring the music of U2 in a slip case cover.

CD album is also available No Line On The Horizon but with a sticker on the front which isn't in the box.

Sample from “Against The Sky” by Harold Budd and Brian Eno from the album 'The Pearl' (Virgin/EMI 1984) Published by Universal Music and Opal Music, London/PRS (Except in N. America & Canada by Upala Music Inc/BMI)

℗ & © 2009 Universal-Island Records Limited under exclusive license to Mercury Records Limited in the UK, Interscope Records in the US and Universal Music Group for the rest of the world.
Made in the EU.

Durations do not appear on this release.

Some came with an alternate Barcode - A large sticker over the original barcode denoting LPN 028 842 807 (see image).

Automatic Cancellation Policy: Orders will be cancelled if payment is not received within 5 days. cf. our policy

Media: Near Mint (NM or M-) A nearly perfect disc. It should show no obvious signs of wear.

Automatic Cancellation Policy: Orders will be cancelled if payment is not received within 5 days. cf. our policy