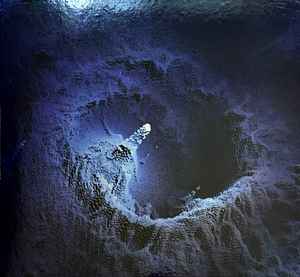 First official release on vinyl advertised as the 'Ultra Deluxe LP'.
Records housed inside a full-colour, mirror-board printed, hardcover book featuring alternate front cover artwork, extra artwork, lyrics and credits all within a full-colour, mirror-board printed hardcover slide-out box, although not advertised as a box-set.
Sealed with a gold-foil sticker underneath a barcode stickered shrink-wrap.

A very limited number of advance copies initially released as a tour exclusive merch item starting on the 20th of February, 2022 in Philadelphia, PA to the 'TOOLARMY' VIP Package holders in each city until they run out of stock and release to the general public at the merch table. These advanced copies are pre-signed on the front cover by the band.

This submission is for the US version of the release. There is an EU release that credits Sony Music as a label and other differences of distribution listed on the small print of the sticker. That release can be found here - Tool (2) - Fear Inoculum

The seller assumes all responsibility for this listing. The seller is responsible for the sale of their items and for managing any issues arising out of or in connection with the contract for sale between the seller and the buyer.