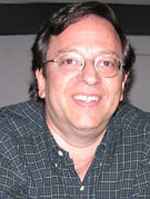 Lacquer cuts can be identified in the runouts by "DON GROSSINGER", "DONGROSSINGER.COM", "dG" or in some cases "G".
Note: dG (d over G) may look like an ampersand "&" or a treble clef symbol. In these cases, please use Lacquer Cut By [Runout Etching Treble Clef Symbol] - Don Grossinger + ANV dG. When in combination with DMM, use Mastered By.

Runs his own mastering studio Don Grossinger Mastering since 2005.