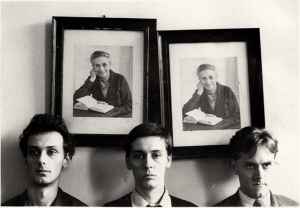 Profile:
In 1976, Charles Hayward of Gong (and Phil Manzanera's Quiet Sun) joined with Charles Bullen and Gareth Williams to form This Heat. Though arising from art-rock and the British school of fusion jazz, This Heat quickly developed into an experimental band largely dependent on tape loops and production tricks. This Heat dissolved in 1982-1983 following a European tour in which Trefor Goronwy replaced Gareth Williams who had recently departed the band. Charles Bullen went on to solo work and put together his own studio in the late 1980s; he has recently issued a CD under his own name. Charles Hayward decided to keep up public performances and formed The Camberwell Now along with Trefor Goronwy and several others.
Sites:
Facebook, squidco.com, Wikipedia
Members:
Charles Bullen, Charles Hayward, Gareth Williams, Trefor Goronwy
Variations:
Viewing All | This Heat
ディス・ヒート

April 10, 2022
Magic Mystery Four! The two LPs from 79/81 really changed my life (along with the Residents). Highly experimental yet melodic. I can still sing all the melodies in my head.
Read Bradx !
Reply Notify me Helpful

February 28, 2016
We were told to expect more. And now that we've got more, we want more! (reissues of course)
Reply Notify me 5 Helpful

April 20, 2014
An example of a band who created timeless experimental music that actually still sounds contemporary .... and even futuristic today.
The first album combines tape loops, musique concret interludes, punishing drumming, hypnotic grooves, studio tricks and some incredibly surreal songwriting:
24 Track Loop and Horizontal Hold have a studio-as-instrument vibe... there's much in common with dub reggae.
The Fall of Saigon and Twilight Furniture are strange but melodic almost-pop sings.
Water, Rainforest and Diet of Worms are more freeform abstract pieces.
Really this album is a high water mark of UK post-punk (although some tracks were actually recorded pre-punk in Feb. 1976).
The second album 'Deceit' is much more song- based... but still great and must be heard.
If you have a passing interest in late '70s UK punk and post-punk, dub reggae, avant garde musique concret and experimental jazz/ rock.... or you are a fan of Can, The Residents, King Tubby, Soft Machine, Chrome... then hear this band.
Reply Notify me 11 Helpful